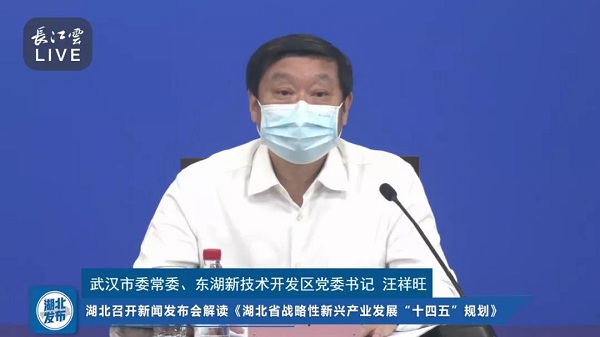 Wang Xiangwang,  secretary of the Party work committee of the East Lake High-tech Development Zone, delivers a keynote speech at a provincial news conference on Aug 17. [Photo/WeChat account of Optics Valley of China]

A news conference was held on Aug 17 by the Hubei Provincial Government in which Hubei's 14th Five-Year Plan (2021-25) on developing strategic emerging industries was further interpreted.

The plan proposes that by 2025, two 1-trillion-yuan ($150 billion) industries – healthcare and information technology – should take shape in Hubei. The East Lake High-tech Development Zone (also known as Optics Valley of China or OVC) has been performing well in the two industries, and will continue to play a leading role in the provincial goal.

The output value of strategic emerging industries in Hubei should double by 2025 to hit 5 trillion yuan, which should contribute 20 percent of regional GDP and be higher than the national goal by 3 percentage points.

Meanwhile, Hubei should also work to become the world's capital of storage and design, a national base of optoelectronics, new vehicles, healthcare, bio-breeding, aerospace and aviation, and cyber security, as well as a cradle for future industries.

Optics Valley plays a significant role in the provincial industrial layout. Figures speak for themselves. Last year, the valley's regional GDP exceeded 200 billion yuan, with its comprehensive strength ranking sixth among 389 national high-tech development zones and economic development zones in China. The valley's total investment in strategic emerging industries surpassed 30 billion yuan in the first half of 2021, accounting for 98.9 percent of the region's total industrial investments.

Chen Huanchun, academician of the Chinese Academy of Engineering, emphasized three aspects in Hubei's development of strategic emerging industries – science, technology and products. He highlighted the dynamics existing between science and technology – science turns money into knowledge, and technology transforms knowledge into money.

"Enterprises are the building blocks of society, wealth, and innovation. We should accelerate the cultivation of local firms and attract companies from around the world to Wuhan," Chen added.

Zhang Xinliang, vice president of Huazhong University of Science and Technology, explained at the news conference how the Optics Valley Laboratory will bolster the local industry.

The lab will further relocate high-quality platforms, disciplines, talents, and sectors in the optoelectronic information area and will rely on support from the university and top-notch research teams and enterprises to tackle a series of bottlenecks that involve core technologies and accelerate technology transfers. The lab will also explore modern administrative systems and operating mechanisms.