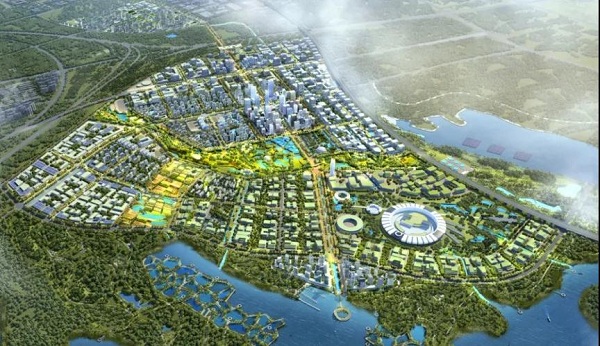 A rendering of the East Lake Science City, which lies at the core of the Optics Valley Sci-Tech Innovation Corridor. [Photo/WeChat account of Optics Valley of China]

News from a local government work meeting on July 28 in Wuhan, capital of Central China's Hubei province, suggests that the initiative to build an innovative, prosperous, and beautiful East Lake High-tech Development Zone (also known as the Optics Valley of China, or OVC) is currently underway.

The significant achievements of OVC in the first half of 2021 show that the initiative is off to a good start, with the regional GDP of the Optics Valley exceeding 100 billion yuan ($15 billion) for the first time, and more than half of its annual goals accomplished.

To bring in more innovative resources to the valley, the authorities have accelerated the construction of the East Lake Science City, five provincial key laboratories, and a batch of major technological programs, along with their supporting infrastructure. Incentive policies on high-end talents have also been formulated to enhance core competency.

Statistics indicate that during the first six months of this year, the valley has added 1,973 high-tech companies and three publicly listed enterprises. There are 11,000 new market entities in the valley, over 6,700 of which are corporations.

To make Optics Valley a more attractive and hospitable place to work and live in, government officials have been working on a brand-new road network featuring seven avenues that lead eastward. The Hubei Women and Children's Healthcare Center's Optics Valley Branch has begun operating, and the Optics Valley Cultural Central has begun construction, raising the quality of the city life step by step.

OVC reported robust growth in infrastructure investment and building industry output, which increased by 38.1 percent and 45.8 percent, respectively, compared with 2019.