Optics Valley, integrating diverse cultures, has formed distinctive festivals which are becoming a focal point of attention from within and abroad.

Launched in 2002, OVC Expo, or the Optics Valley of China International Optoelectronic Exposition and Forum, ranks in the top three photoelectron exhibitions in China. Held every November in Wuhan, it enjoys high international popularity and is the largest expo of its kind throughout the central and western region. It is co-organized by five ministries and commissions including the Ministry of Industry and Information Technology, National Development and Reform Commission and Hubei Provincial People’s Government.

Wuhan Open is a tennis tournament of the highest level third only to the Beijing China Open and Shanghai Masters. It has been held in every September in Wuhan since 2014, between the Guangzhou Open and the China Open. The major competition of the Wuhan Open is the WTA (Women’s Tennis Association) Tour, which has a total tournament bonus of $2.4 million. The champion will also obtain 900 points in their personal record.

As the main venue for the Wuhan Open, Optics Valley International Tennis Center is located near Erfei Mountain in the East Lake High-Tech Development Zone (Optics Valley). It contains a major venue of 15,000 seats, a subsidiary venue of 5,000 seats and six outdoor standardized hard courts.

With the architectural shape of a tennis ball whirling at high speed, the tennis center has been nicknamed “whirlwind court”. The size of the major court of the tennis center is similar to that of the Australian Open, which perfectly meets the requirements of the WTA Tour. 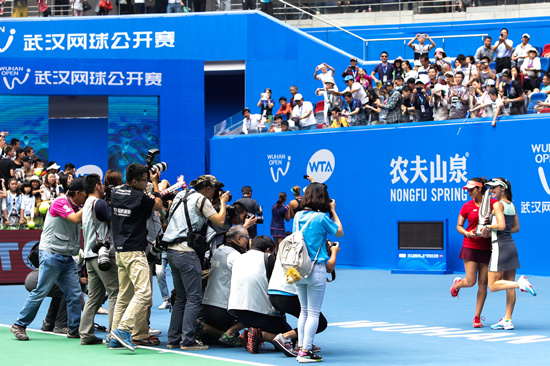 As one of the largest and most honored animation exhibitions in Central China, the Wuhan Optical Valley Animation Festival aims to integrate the animation and game industries, offering a platform for achievements in display, market expansion, experience sharing and trade authorization. Since the first festival in 2006, it has become a supreme animation event in Central China.

With theme elements surrounding cartoon culture, visual appreciation and innovative concepts, the festival consists of cosplay competitions, e-sport games, animation concerts and a creative products exhibition, attracting animation fans, associations and merchants from all over the world. This animation festival has become a brilliant scene in Wuhan, bringing people a marvelous visual feast as well as novel cartoon innovative concepts.

Being the most grass-roots and indigenous music platform in Wuhan, the Optics Valley Music Festival provides a stage for lovers of song to divulge in their talents.

Since the first music festival in 2008, Optics Valley has attracted young singers and musicians from April to May every year.

With mass-election, quarter final, semifinal, final and pk (player killing) contests, the most popular candidate will stand out after two months competitions. The winner will not only be awarded an impressive bonus, but will also get the opportunity to receive professional guidance. To date, the music festival has made many popular idols, such as pop star Hua Chenyu.

The six-month Optics Valley Sports & Culture Festival is a pageant with participation of all people in Wuhan. Aside from popular sports including table tennis, badminton, tennis and basketball, some cultural and art contests are also available such as calligraphy, photography and painting.

Co-organized by Hubei Administration of Sport and Optics Valley, the festival is attended by street communities, enterprises and administrative units.

The festival in Optics Valley benefits citizens' physical health and cultural accomplishment by bridging the communication and exchange of different enterprises, cultivating the vigorous and industrious personality of local people, and promoting the harmonious and healthy development of an economic society.

Focusing on creation, investment and the spread of micro films, the festival is expected to forge a high-end brand event with the greatest global impact, aspiring to obtain the largest number of participants as the most widespread event of its kind in the future.

The first Optics Valley International Micro Film Festival was held on Nov 1, 2014, which was received with global enthusiasm. The themes of “Entrepreneurship” and “Your dream will glitter” attracted over 300 worldwide micro films. It also improved the cultural industry’s competitiveness of Hubei and gradually formed a display platform of superior-quality micro films in Central China.