A birding farmer found his flyway in Wuhan 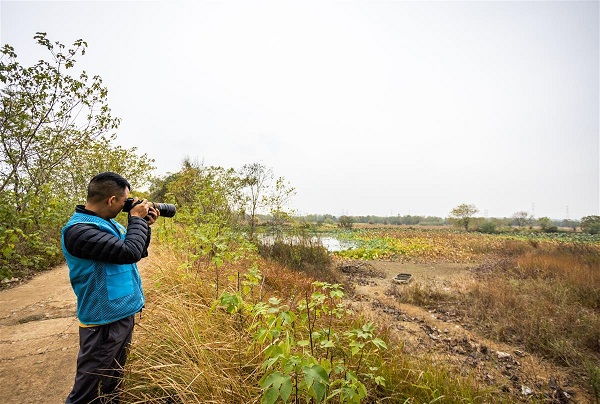 Zhu has become a member of Wuhan Bird Watching Association. He now patrols the pond everyday with his camera. [Photo by Cheng Rongxing]

Through the viewfinder, he saw four ducks at the water's surface dozens of metres away cruising leisurely under dry lotus.

"Here they are!" Zhu shouted out with joy and happiness.

It's a time that he has been waiting for several days and the time when the 14th Meeting of the Conference of the Contracting Parties to the Ramsar Convention on Wetlands takes place in his hometown, Wuhan, a city well-known as the "city of rivers". 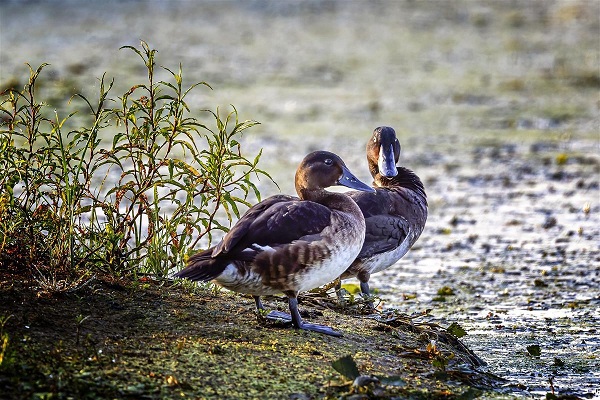 The wild duck that Zhu cherished so much is Baer's pochard (Aythya baeri), a state-level endangered animal species in China and a critically endangered species in the world. Less than 2,000 mature individuals were estimated to exist around the world.

Since 2014, their inhabitation and breeding have been continuously observed and recorded in Wuhan. In 2015, after an investigation in the city, Richard Hearn, director of the species protection project of the WWT (Wildfowl & Wetlands Trust) confirmed that Baer's pochards have settled in Wuhan, which is their southernmost breeding ground.

Thanks to the cooperation among government departments, social organisations and local villagers, the range of activities of the wild ducks has expanded year by year in the city while the total has also increased.

Before April 2022, Zhu knew nothing about these things.

He went out for work in his early years. After returning to his hometown in 2010, he contracted a pond near his home for fish-farming. However, due to continuous floods that had destroyed the fish pond, he suffered great losses.

With the hot sale of crayfish in the Wuhan market during recent years, in 2016, Zhu Xiangneng turned to crayfish aquaculture. Since then, he has noticed some unusual wild ducks around.

"But I didn't know anything about Baer's pochard at that time, so I didn't take it to heart."

It was not until mid-to-late April this year that Zhu met a member of the Wuhan Bird Watching Association who came to watch birds near his pond. He then learned that the group of wild ducks was critically endangered and his pond for crayfish farming could be the third breeding site for these little creatures in Wuhan.

From a farmer to a bird protector

Growing up by Baoxie Lake, Zhu felt that for a long time birds were like chickens and ducks raised at home. In his childhood, he even used to shoot birds by slingshot with his neighbours. But as he aged, a deeper understanding of birds has been gradually formed in his mind that they are friends of human beings.

When members of the Wuhan Bird Watching Association asked Zhu to help look for nests of Baer's pochards in his pond, he agreed immediately. And to everyone's surprise, he found a complete bird's nest in the grass in the middle of his pond two days later, with 13 eggs neatly nestled inside.

Yan arrived there immediately after receiving the news. After repeated searches, he found more breeding nests of Baer's pochards. After the discovery, Zhu was persuaded to install thermal cameras for further surveillance of the bird.

A young Baer's pochard around 6 weeks old was photographed by Zhu Xiangneng in his pond.

"Letting birds breed in my pond has little effect on my business and I would love to protect them." From April to September this year, the most exciting thing for Zhu was to sort out videos recorded by the thermal cameras once a week and check the status of his bird friends:

On May 21st a mother duck took 10 ducklings to play in the water and they enjoyed themselves under lotus leaves.

On June 2, a mouse sneaked into one of the nests at night to steal eggs but failed.

"During the breeding season this year, Baer's pochards built 10 nests in my pond and laid 99 eggs. Two nests were destroyed by weasels, but 73 ducklings hatched at last." Since then, Zhu acted like a nanny. He walked around the pond twice a day in the morning and evening to prevent anyone from poaching or disturbing the birds.

A change of life for Zhu and the birds

Bird watching has quietly reshaped Zhu's life in the past seven months as Zhu improved the habitat of Baer's pochard in Wuhan.

"I play less mahjong now while getting closer to nature every day. I'm having a much healthier lifestyle."

At present, Zhu has officially become a member of the Wuhan Bird Watching Association and volunteers for patrolling around the pond and protecting birds.

The Association also lends Zhu telescopes and cameras and teaches him how to take pictures and identify different wild birds.

"Some of the photos I took were recommended by the Association and were seen by a lot of people on the Internet. For the first time, I have a sense of accomplishment."

Zhu said that now he can identify more than 50 kinds of birds. Those unknown wild birds he saw in his childhood could now be easily recognised. "Thinking that some of these birds have been to Siberia or India and ended up flying to me, I feel more connected to the world. Like the birds, now I find my flyway."

When it comes to plans for the next several years, Zhu said that he has decided to keep the extensive farming of crayfish in his pond in order to offer these birds a more favorable place to live.

Besides Zhu, the city has also been improving the environment. According to the local government, in March this year only, 401 Baer's pochards showed up in 11 wetlands in Wuhan, among which 3 breeding grounds were observed.

Click the video provided by Hubei Daily to learn more about the bird protector.