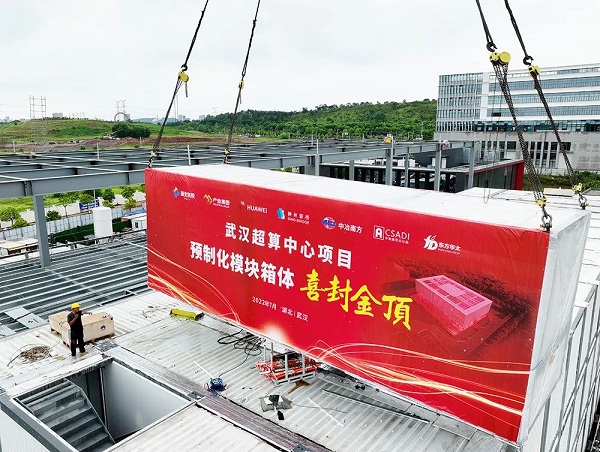 A roofing ceremony for the Wuhan Supercomputing Center is held on July 19. [Photo/WeChat account of Optics Valley of China]

The Wuhan Supercomputing Center, located in the East Lake High-tech Development Zone (also known as Optics Valley of China, or OVC), was roofed on July 19 and is scheduled to begin operating on Sept 30.

The construction of the center made heavy use of modular prefabricated boxes, allowing workers to install infrastructure and other basic facilities inside the box before being lifted into the center's main structure. Construction workers shifted duty every 24 hours, shortening total construction time by one third.

There are 61 modular prefabricated boxes used in the center, with each box being 12.2 meters long, 3.5 meters wide, and 4.2 meters high.

The Wuhan Supercomputing Center is the first computing cluster offering artificial intelligence and high-performance computing services at the same time. In February this year, the second phase of the Wuhan Artificial Intelligence (AI) Computing Center was put into use, with its computing power standing at 200 petahash per second. The two centers are expected to combine efforts to empower industries and stimulate economic momentum.