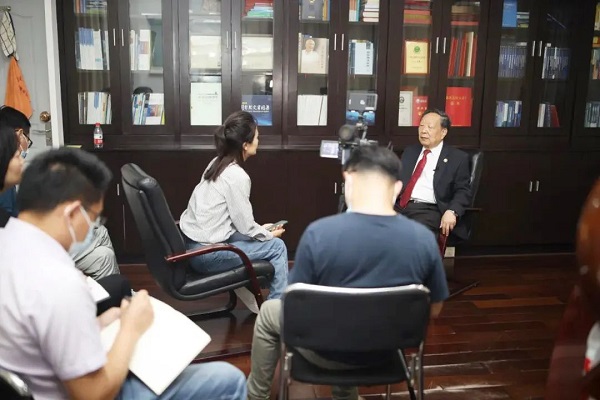 Li Deren is interviewed by several local reporters at his office. [Photo/WeChat account of Optics Valley of China]

China is heading toward its second centenary goal and is focusing on building scientific and technological facilities such as national laboratories and sci-tech innovation centers. Hubei must seize upon this opportunity to invest more in the East Lake Science City, said Li Deren, academician of both the Chinese Academy of Sciences and the Chinese Academy of Engineering, in a recent interview. He is also a professor at Wuhan University.

National labs represented the highest level of their kind, and cutting-edge scientific research is being conducted there based on the country's demands.

"We don't need to excel in every field. We just need to choose some basic scientific areas that Hubei is strong in. And we only need to lead China and the world in several fields. But the question as to which fields we need to focus on must be answered through discussions among Hubei's scientists," said Li.

He also envisioned an innovation-oriented and inclusive environment that allows young and senior scientists' imaginations to become reality.

"If certain kinds of experiments can only be carried out in Hubei, then scientists in many other countries will voluntarily come here. This is the nature of a scientist," said Li, who advised that government funds and social capital should support scientific research, which will convince more scientists to carry out their research in the East Lake Science City, especially basic, practical and engineering research.