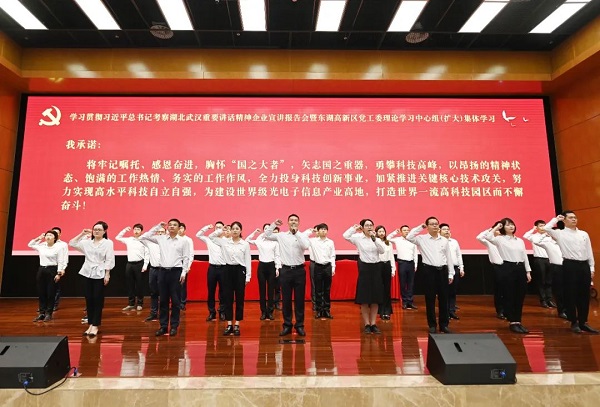 A mobilization meeting for entrepreneurs, scientists and researchers in the East Lake High-tech Development Zone (also known as Optics Valley of China, or OVC) took place on July 11. It was participated in by more than 120 representatives of Wuhan-based universities, local corporations and research institutes.

A total of 30 young doctors aged under 40 made solemn vows on stage and led all scientific workers present in reading their commitment letters.

As three representative companies founded in OVC, they lead optoelectronic development in three ways. YOFC, which is as old as OVC, is not complacent with merely bringing in foreign technologies, and now owns the intellectual property rights for its main products; CICT is now a Wuhan-based enterprise owned by the central government; and HGTECH – which owes its founding and accomplishments to Huazhong University of Science and Technology – has now become a national innovative giant.

On behalf of OVC's scientists and researchers, Xu Hongxing, an academician from the Chinese Academy of Sciences and president of the School of Microelectronics at Wuhan University, Yan Dapeng, chief engineer of Wuhan Raycus Fiber Laser Tech Co, and Ren Gaoliang, director of the National Intelligent Design and Numerical Control Technological Innovation Center, also delivered speeches at the event, sharing their personal views with other researchers.

All the attendees, including Liu Jie, secretary of the valley's Party work committee, wrote their names on a commitment wall, promising to live up to the central government's calls, devote their lives to innovation, and turn OVC into a world-class optoelectronic hub.