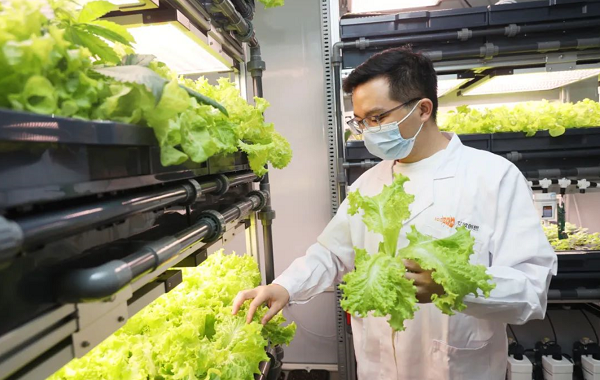 A researcher from IOIDEA inspects lettuce growing in the thermostatic chamber. [Photo/WeChat account of Optics Valley of China]

IOIDEA Technology Co, an IOT basic service provider based in the East Lake High-tech Development Zone (also known as Optics Valley of China, or OVC), has developed an advanced "plant workshop" system for mass cropping, which has been sold both in domestic and overseas markets.

In a thermostatic chamber using the plant workshop system, LED lights act as the sun to provide sufficient light for vegetation, while the software calculates the necessary nutrients and moisture in the chamber, based on data transmitted from real-time sensors.

This system makes it possible to plant vegetation in difficult habitats such as deserts, plateaus, and islands. "The biggest cost of the system is energy. But these places with extreme conditions are usually abundant in solar and wind energy, allowing us to use the system," said Huang Zhigang, the firm's market manager.

When the sun does not come out, the LED light will turn on automatically and work in place of the sun. Grapes cultivated in this way are sweet and large, with no diseases or pest problems, Huang explained.

This type of mass planting is a revolution for human beings and means people can finally overcome the limits of the natural environment and produce enough vegetation to meet the needs of mankind.

For example, soaring demand for meat has driven some farmers to feed cows immature forage grass. "We want to plant forage grass using this system. Farmers can reap the grass about 50 times a year. What's more, the indoor intercropping approach also enables us to plant the grass in five layers," said Huang.

Mass planting is a costly business and is suitable for plants with high added value, such as peppers, herbs, flowers and fungi. "If we can emulate the living environment of herbs and add adequate doses of minerals to the nutrient solution, then we will be able to produce herbs at a large scale," Huang said.

The company has been maintaining a low profile since it was founded seven years ago. It currently has more than 100 employees, 70 percent of which are researchers focused on chips, hardware, and software platforms. Its per capita output has exceeded 1 million yuan. IOIDEA is considering listing on the STAR Market in the next two years.