Science city in eyes of doctors 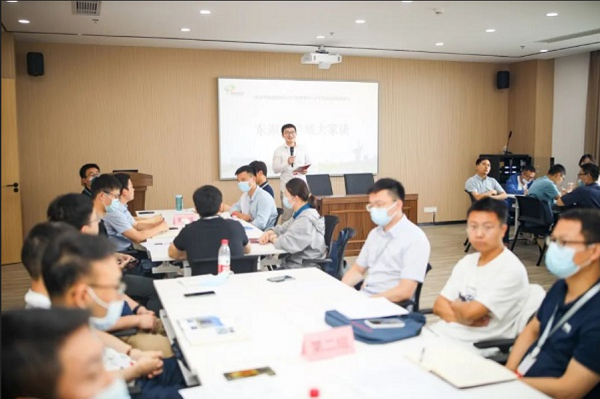 At the recent 3551 talent training session, 10 doctors are interviewed about what they expect the East Lake Science City to be. [Photo/WeChat account of Optics Valley of China]

There are currently more than 20,000 high-end talents working in the East Lake High-tech Development Zone (also known as Optics Valley of China, or OVC) that hold doctorate degrees.

The East Lake Science City that is currently under construction has become a hot discussion topic among the 34 doctors attending the 3551 talent training session that was held recently. They were all born in the 1980s and 1990s and graduated from renowned domestic or overseas universities. Among them, 10 were interviewed about what they expect the East Lake Science City to be.

Xiang Yang, a 29-year-old doctor from Huazhong University of Science and Technology, expressed his hope that the government will notice the spatial limitation among upstream and downstream enterprises in the precision manufacturing industry and try to build a "one-hour laser industrial circle" to help intensify interactions between these firms.

He also said he expected more governmental support to be given to the technology transfer process, such as holding small-scale technological exchange meetings to set up dialogues among industries, universities and research institutes, and presiding over high-level international conferences to broaden industrial prospects.

Chen Cong is a doctor from Wuhan University who focuses on the protection of intellectual property rights (IPR) and proposed that Optics Valley of China should give full play to its role as an IPR overseas service base to encourage exporters to place more importance on overseas IPR.

In addition, he said that government can provide financial assistance for IPR transfers and can gain IPR operation status through dynamic management and real-time monitoring measures.

Sun Jian, a graduate from the Chinese Academy of Sciences, is currently working at Guide Infrared – a company based in OVC. He suggested that the government take living facilities that support industrial parks in the science city into consideration. More parking lots, business districts, catering bodies and other recreational spaces are expected to be planned to improve employees' quality of life.

Zhao Fang, a doctor from Wuhan University, noted that the science city has many reservoirs, which may be polluted or damaged when the science city is being constructed, and it would be quite costly to rehabilitate them if they are destroyed. Therefore, it is essential to adhere to sustainable and low-carbon principles in the construction of the science city and prioritize the coordinated governance of mountains, waters, forests, farmlands and grass.