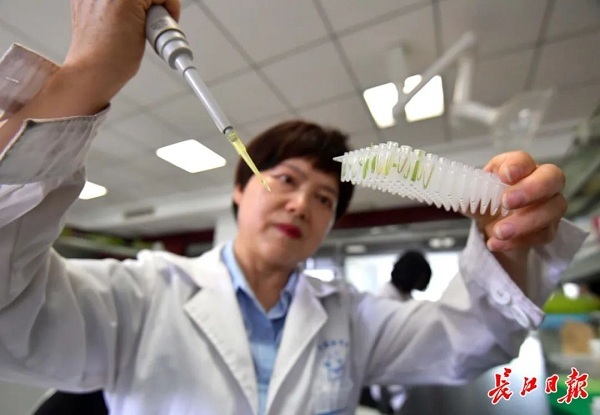 A researcher observes seedlings at a lab. [Photo/Changjiang Daily]

At the laboratory of the Hubei Provincial Seed Group Co – based in the East Lake High-tech Development Zone (also known as Optics Valley of China, or OVC) – high-quality seeds are being developed and promoted around China and being exported to South Asia and Africa.

The company invests hugely in seed research every year. "Wuhan spends 60 million yuan ($8.95 million) to support its seed industry, and we are the industry leader and have benefited a lot from the fund," said a higher-up at the firm.

Hubei Provincial Seed Group Co was one of the first companies to set up operations at the Wuhan Agriculture Innovation Center, which is also based in OVC, and has cultivated China's only super rice, solidifying its reputation in the country.

Through effective coordination between the firm's departments – sales workers deliver feedbacks on customer demands, and researchers boost sales with supporting technological services – a virtuous cycle has been formed.

Seeds developed by the company have not only transformed the domestic agricultural landscape, but also helped other countries with grain output. The firm has established a R&D base in Pakistan to conduct research on seeds most suitable for the local climate and soil. And more than 50 percent of Bangladesh’s farmland has grown hybrid rice developed by the firm.