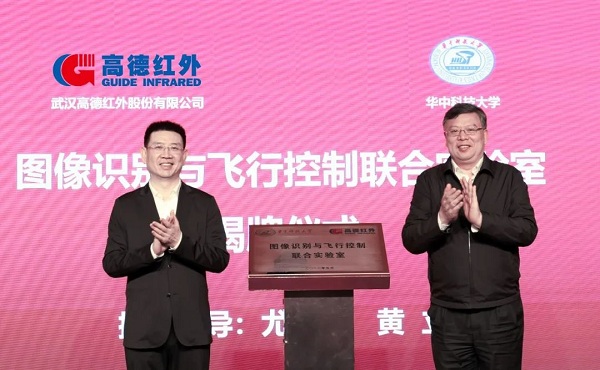 Huang Li, chairman of Wuhan Guide Infrared Co, and You Zheng, president of the Huazhong University of Science and Technology, pose for a group photo at the lab's unveiling ceremony on May 10. [Photo/WeChat account of Optics Valley of China]

Wuhan Guide Infrared Co unveiled an image recognition and flight control laboratory with the Huazhong University of Science and Technology (HUST) on May 10. It is the second joint effort between the two parties since they launched an advanced infrared detection laboratory in 2021.

According to the contract signed between the two sides, the lab will make full use of the resources of the two parties and focus on addressing technological bottlenecks in this area and accelerating relevant technology transfers.

As one of the first universities approved under the national "Double First-Class" Initiative – China's "Excellence Initiative" for institutions of higher education – HUST boasts competitive teaching teams. It is an important base for technological talent cultivation and basic science research.

Statistics from the Guide Infrared's first-quarter performance report show that over the first three months of this year, the company registered 742 million yuan ($110.41 million) in sales revenue, up 12.95 percent year-on-year, with its net profit growth standing at 30.62 percent.