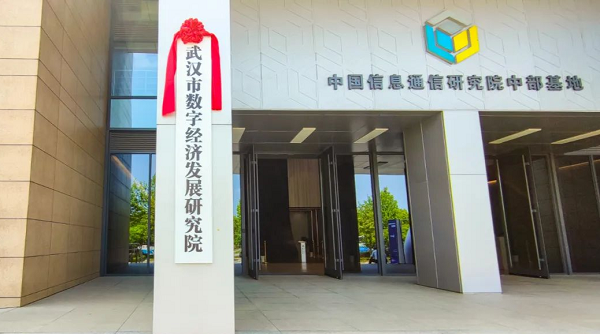 The Wuhan Digital Economy Development Institute is unveiled on April 24 in OVC. [Photo/WeChat account of Optics Valley of China]

The unveiling ceremony of the Wuhan Digital Economy Development Institute was held on April 24 in the East Lake High-tech Development Zone (also known as Optics Valley of China, or OVC) in Wuhan, Hubei province.

Jointly founded by the Wuhan Municipal Government and China Academy of Information and Communications Technology (CAICT), the institute is the latter's fourth project launched in OVC and was designed to coordinate with Wuhan's higher education and corporate resources and participate in cutting-edge technological research, macro strategy consultations, assessment of development levels, and data-related legislation.

Yu Xiaohui, president of CAICT, hailed the establishment of the institute and delivered a keynote speech via video link, citing CAICT as helping formulate a slew of national policies related to digital economy innovation, industrial internet and industrial digitalization. Yu said he aims to build the new institute into a first-class regional information and communication technology think-tank that will play a significant role in Wuhan on its path to becoming a first-tier city in terms of digital economy.

Liu Jie, secretary of OVC's working committee, expressed her gratitude for the huge contribution made by CAICT, as well as other digital economy forerunners, such as FiberHome, Huawei and Tencent, as the digital economy currently accounts for more than 40 percent of Wuhan's GDP and the industry has shown strong resilience against headwinds. She vowed to turn the Optics Valley of China into an influential digital economy demonstration zone.