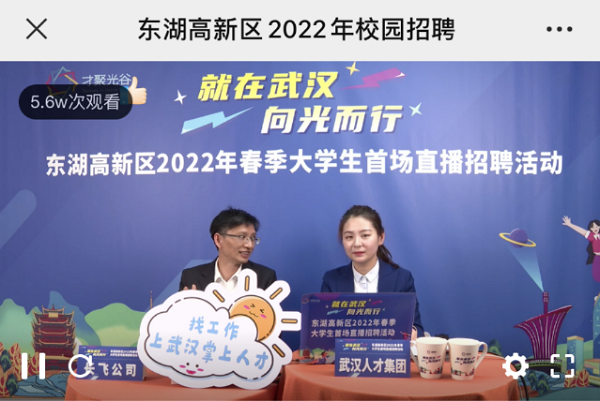 A recent spring recruitment livestreaming session for college graduates held in OVC attracts nearly 60,000 viewers in half an hour. [Photo/WeChat account of Optics Valley of China]

The first livestreaming session of the spring recruitment campaign for college graduates this year was held in the East Lake High-tech Development Zone (also known as Optics Valley of China, or OVC). Offering more than 30,000 positions, the session involved the online participation of nearly 60,000 people.

OVC will soon hold a second livestreaming session and four school-based recruitment activities, and plans to arrange at least 20 activities throughout the year with the goal of retaining more than 100,000 graduates.

Wuhan has been becoming increasingly attractive to graduates of local universities. Statistics show that last year, the number of retained graduates hit 345,000, and the target for this year is at least 300,000.

Optics Valley of China has been deemed a desirable place to work by 550,000 graduates since 2017, 55.9 percent of which have at least a bachelor's degree.

The valley is currently working on expanding the cooperation scale of local enterprises and colleges, increasing the coverage of scholarships for students, establishing useful platforms to facilitate employment, and offering nearly 1,000 free or low-cost cubicles for all kinds of entrepreneurs.

The Wuhan municipal human resources and social security bureau is scheduled to organize over 180 job fairs that provide 300,000 jobs. Meanwhile, the city will upgrade its policy support for talent willing to stay in Wuhan.