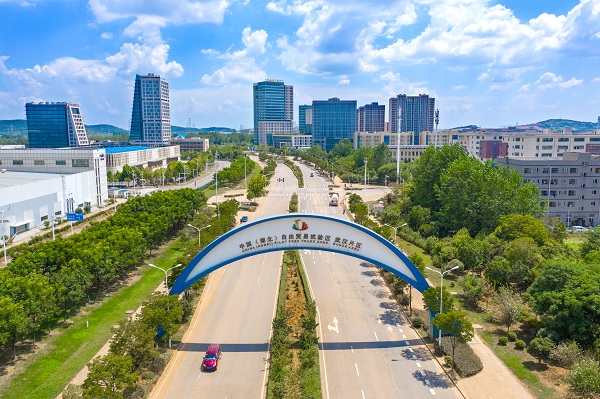 The gate of Wuhan connects world through innovation. [Photo/Optics Valley of China]

Wuhan has strengthened its connections with the rest of the world, not through the tea trade as in ancient times, but through constant innovation.

The East Lake Free Trade Zone (FTZ) – the first of its kind in Central China's Hubei province – was established in 2013 and began operating in the East Lake High-tech Development Zone, also known as Optics Valley of China (OVC). In 2017, the China (Hubei) Pilot FTZ Wuhan Area was also unveiled in OVC.

The FTZ has entirely transformed the way Wuhan interacts with the outside world. At a manufacturing plant owned by Lenovo, based in the Wuhan Area, at least one mobile phone or laptop rolls off the production line every second. With its daily output reaching 140,000, the plant is the company's largest and most advanced, and nearly 90 percent of its products have been transported from OVC to more than 160 countries and regions throughout the world.

Statistics show that the plant registered about 40 billion yuan ($6.27 billion) in exports and imports last year, up 30 percent year-on-year and ranking first in Hubei province for the seventh year in a row.

YOFC – the world's leading supplier of optical fiber preforms, optical fibers, optical cables and integrated solutions – is another firm striving to go global via innovation. In June 2021, it acquired shares in the Brazil-based Poliron, marking a milestone in its development in Brazil and Latin America.

The firm has now set up factories in Indonesia and South Africa, with its plant in Poland under construction, and has established over 40 overseas offices worldwide. These offices and factories helped YOFC form its global networks of production, sales and services.

Conducive policies are a major help to enterprises striving to find their niches in the global market. After five years of trials, the Wuhan Area has delivered 238 successes in systematic innovation, 10 of which have been promoted nationwide.

For example, matters involving equity transfers and the alteration of judicial persons used to be tedious as they required the physical presence of the shareholder to ensure the authenticity of the information being submitted. Now they can be done by simply scanning shareholders' faces via video link.

So far, more than 7,000 shareholders, executives and judicial persons overseas have benefited from the change. And over the past five years, 65 major foreign investment projects have been introduced in the Wuhan Area.