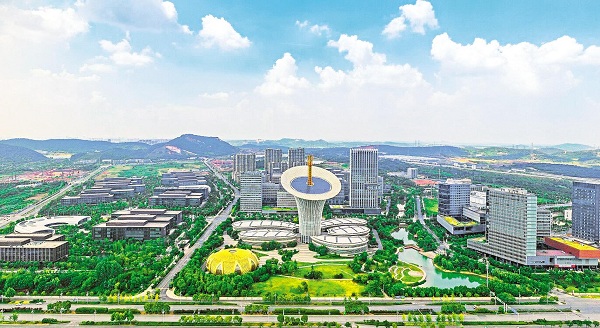 Wuhan Citms High-technology Co was successfully listed on the science and technology innovation board of the Shanghai Stock Exchange Science on July 13 last year thanks to the consistent support of the East Lake model, which has been promoted nationwide.

Hubei province in Central China is rich in higher-educational resources, accommodating more than 100 universities and 2,000 scientific institutions. It has been a long-standing endeavor for the province to turn its educational resources into innovative results. However, with large investments, high risks, and high yields, high-tech industries previously lacked the financial guarantees to accelerate technology transfers.

Intellectual property rights are often deemed as the most valuable assets of such companies, but they previously didn't receive due recognition from the bank, which always focused on corporate collateralized assets and firm's short-term profit capacities.

In this regard, Hubei's exploration of technology finance began more than a decade ago. In 2016, the Wuhan government coordinated with the Wuhan branch of the People's Bank of China and initiated the practice of issuing IPR mortgage loans.

By the end of 2009, Optics Valley of China had received approval to construct a national innovation pilot zone and had an opportunity to advance tech-fin reforms and new practices in equity incentive plans. In 2015, according to an official statement made by the State Council, the Wuhan metropolitan area had become China's only tech-fin innovation pioneer zone.

This reform, along with the vigorous implementation of a series of financial policies, has proved effective. By the end of March last year, Hubei had issued 6.9 billion yuan in IPR mortgage loans. The province's high-tech industries also registered an added value of 208.08 billion yuan over the first quarter of 2022, a year-on-year increase of 102.7 percent.