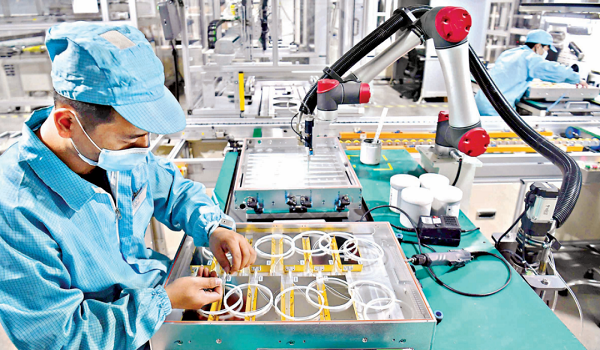 The Laser Industrial Technology Innovation Union was established on Feb 18 in Wuhan, Central China's Hubei province, becoming the first of its kind in the province. One of the primary aims of the union is to achieve 100 billion yuan ($15.77 billion) in laser-related output .

Wuhan Raycus Fiber Laser Tech, a laser giant in the East Lake High-tech Development Zone (also known as Optics Valley of China, or OVC), was assigned to lead the union.

According to Chen Xingxing, general manager of Raycus, Wuhan’s laser industrial chain output ranks among the top three in the nation, and technological bottlenecks should be tackled if the industry aims for further prosperity.

Faced with soaring industrial demand, Jianghan University set up a flexible display material and technology center. Through years of research by Professor Liu Jiyan and his team, as well as coordination with Huazhong University of Science and Technology, Tianma Microelectronics Co, and TCL, suitable basic materials for the production of foldable mobile phone screens have been developed and widely applied.

Meanwhile, joint efforts have been made by Huazhong University of Science and Technology, the National Innovation Institute of Digital Design and Manufacturing, and TCL to independently develop inkjet printing equipment for advanced displays, which are currently in the testing phase.

Li Zuojun, researcher from the Development Research Center of the State Council, said that Wuhan is in the right position to launch such innovation unions because the city is equipped with full-fledged industrial chains and systems as well as well-allocated talents, technologies, data and information.

Also worth noting is the government's role in innovation unions. In addition to the requirement that there be one chief scientist, one major research direction, one high-level research team in the union, and that the union should lead the collective innovation among the upstream and downstream enterprise in the laser industry, the government will not interfere with the union's management and decisions regarding staff members, finance and specific operation model.