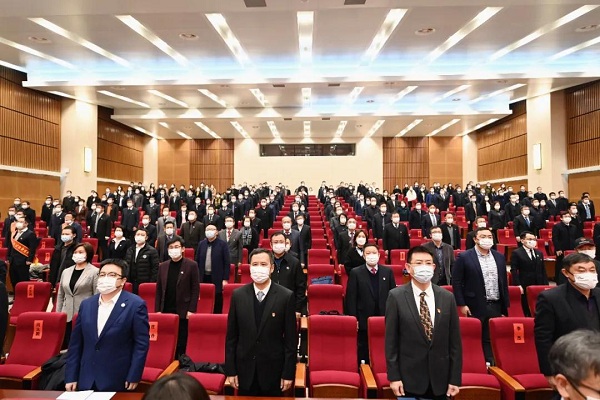 All members stand and sing the national anthem before the meeting. [Photo/WeChat account of Optics Valley of China]

According to a meeting held by the working committee of the East Lake High-tech Development Zone (also known as Optics Valley of China, or OVC) on Feb 16, the valley's government plans to build a world-class East Lake Science City, make the valley more internationally influential, and construct a light-chasing scientific zone with promising prospects.

The event was presided over by Liu Jie, director of the valley's administrative committee, and attended by more than 10 national, provincial and municipal deputies of people's congresses, national political advisers, and entrepreneur representatives from companies based in OVC.

The specific goals to fulfill for 2022 in the East Lake Science City were released, and the science city is expected to build two more national technological innovation centers and raise the total number of high-tech firms to at least 5,400, with added value growth in the field to exceed 15 percent.

The regional GDP of the science city this year is expected to reach 300 billion yuan ($47.31 billion), with due attention to city functions, the public service system, and city management so as to enhance the in-depth integration of sciences, industries, people and city functions.

The outstanding results achieved by the OVC government last year – including the establishment of five Hubei laboratories, three major scientific and technological facilities, and two State-level technological innovation centers – were praised at the meeting.

In addition, the valley's regional GDP topped 240 billion yuan, with the business scale of six enterprises above a designated size reaching 10 billion yuan.

The Optics Valley Ecological Corridor and the Golden Cross Axis projects have taken shape as well, with a group of medical, educational and cultural programs launched.

YOFC, Wuhan Raycus Fiber Laser Tech, HGTECH, and seven other companies were selected as the 2021 Optics Valley enterprises with the best economic performance.