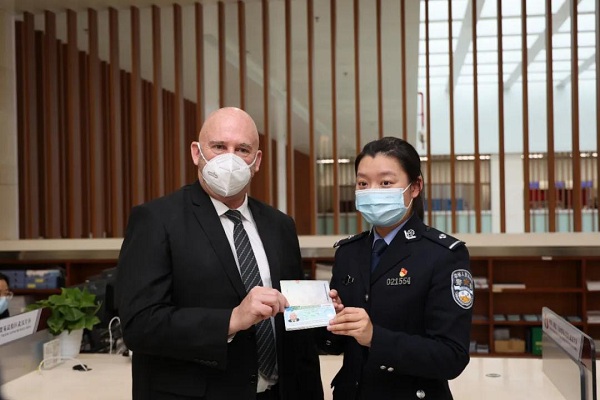 An international school president holding his visa poses with a government worker in OVC. [Photo/WeChat account of Optics Valley of China]

Expatriates working and living in Wuhan East Lake High-tech Development Zone (also known as Optics Valley of China, or OVC) can now deal with visa-related matters without leaving OVC, and all matters can now be handled within five days.

Three foreign personnel from Japan, Canada and Ethiopia received their visas from the OVC government on Jan 6.

The visa application and issuing process used to be complex, requiring expats to deliver their application to the public security sector of the valley's government service center, which would first be reviewed by the staff member in the sector, and then approved by the exit and entry administration department of the wuhan public security bureau. The process took seven weekdays from start to finish.

The valley is now the only district-level service center in Hubei province to be able to make and issue visas locally.

As one of China's three intelligent-intensive areas and boasting the highest concentration of foreign talent in Hubei, Optics Valley of China is currently home to nearly 20,000 overseas returnees and expats, including four Nobel Prize winners, 70 domestic and foreign academicians, nearly 2,000 foreign experts, and over 7,000 overseas entrepreneurship teams.