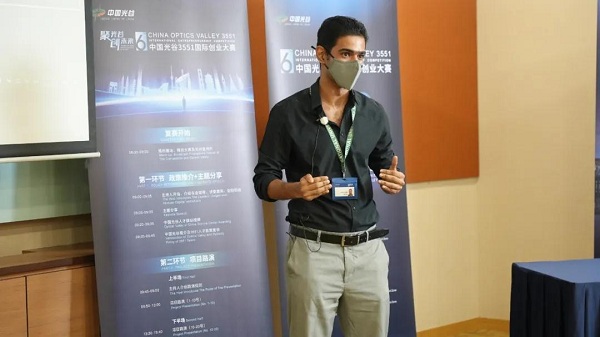 A candidate holds a road show for his project. [Photo/WeChat account of the Talent and Entrepreneurship Office of Optics Valley of China]

The quarter finals of the Asia Pacific track of China Optics Valley 3551 International Entrepreneurship Competition opened at the National University of Singapore on Dec 17.

Three projects have been selected to enter the semi-finals of the competition. The first "Dusting and Desulfurization Integration" project is meant to boost production efficiency in metallurgy, coal fired power plants, and pottery, porcelain and cement manufacturing. All three of the selected projects are considered groundbreaking with major industrial prospects and market potential.

Talent from National University of Singapore, La Trobe University, University of Tokyo, Chinese University of Hong Kong, and other top study institutions in the Asia Pacific participated in the competition. Five specialists with rich investment experience were appointed as judges of the track.

A special overseas talent promotion activity was also included as part of the competition to recruit potential Singapore-based high-tech enterprises willing to establish branches or sectors in the East Lake High-tech Development Zone, as well as research teams willing to transfer their technologies in the zone.