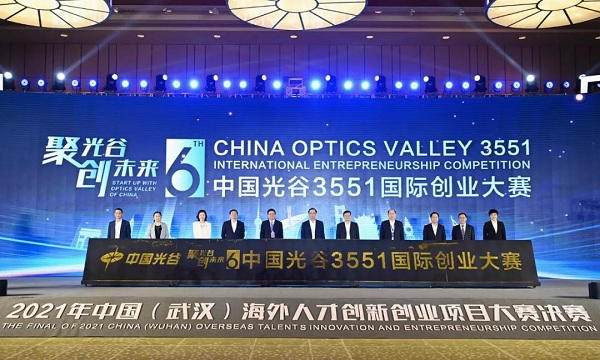 Representatives of competition organizers pose for a group photo. [Photo/Wechat account of Optics Valley of China]

The Final of 2021 China (Wuhan) Overseas Talents Innovation and Entrepreneurship Competition and the sixth China Optics Valley 3351 International Entrepreneurship Competition were held on Oct 13 in the East Lake High-tech Development Zone (also known as Optics Valley of China, or OVC), with more than 300 people from renowned domestic and overseas investors, financial institutions, and innovation teams participating.

This was also the first time Wuhan has held the national competition, which has attracted 577 programs from 29 countries and regions – a new record high.

The 83 programs selected in the final competition focused on electronic information, healthcare, and other pillar sectors of the Optics Valley. Many programs were cutting-edge, and their developers were from famous universities, including Harvard, Stanford, and Cambridge. The valley will sign cooperation agreements with awarded programs in the competition.

The awarded programs in the valley will receive 1 million yuan ($150,000) as a competition bonus, and a maximum of 10 million yuan as a supporting fund for entrepreneurs.