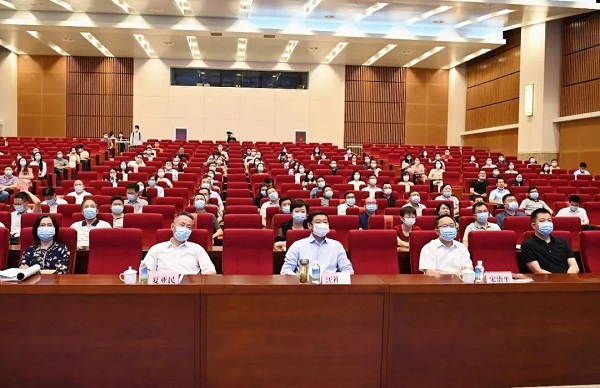 Liu Yong, researcher of Development Research Center of the State Council, was invited to deliver a lecture in the East Lake High-tech Development Zone (also known as Optics valley of China, or OVC) on Sept 14.

Liu said in his keynote speech that the Chinese economy has been rising despite a sluggish atmosphere in the global community, growing by 12.7 percent during the first half of this year.

The basin economy plays a crucial part in domestic circulation, and the Yangtze River Basin, China's largest urban-rural regional economy with the highest developing level, and most important geographical location, will be tasked with more important missions, said Liu.

The basin's regional GDP in 2020 reached 3.56 billion yuan ($534 million) – accounting for 35.5 percent of the nation's total, its per capita GDP hit 87,791 yuan (the highest in China), and its permanent population was 405 million (the most densely-populated area in China).

Liu suggested that Wuhan metropolitan areas integrate with Shanghai metropolitan areas by joining forces with Shanghai, Hefei, and Changsha and establishing a cutting-edge technology innovation belt in the middle and lower reaches of the Yangtze River. These cities are supposed to focus on crucial technologies in mask aligner, quantum computing, hybrid rice, nuclear fusion, and photosynthesis.