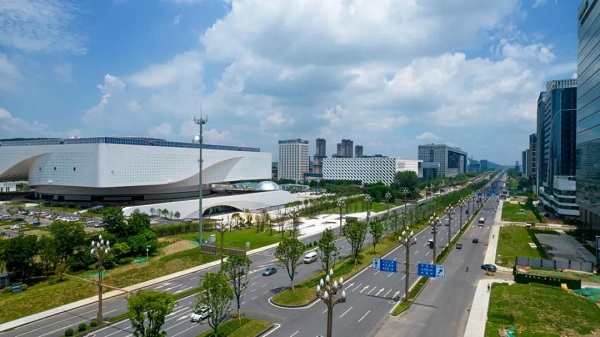 Gaoxin Avenue, a main road in the Sci-Tech Corridor of the East Lake High-tech Development Zone (also known as Optics Valley of China, or OVC), recently opened. One of its highlights is the intelligent irrigation system installed in the green space, which keeps thousands of trees and 60,000 square meters of grass alive without any human intervention.

The irrigation network is 74,401 meters long, equipped with 5,931 sprinkler heads, 45 IoT sensors, and 233 5G controllers and can monitor in real time the moister content in the soil, the amount of water needed by plants, and other important indexes.

All worker need to do is to move their fingers in the control room to be updated about the situation of the plants, water them remotely, and control the irrigation period and intensity.

The smart irrigation system was designed by an OVC-based company – Wuhan Heda Tech Co – which mainly consists of young people of the post-90s generation, including the company's CEO, Liu Shisheng.

Liu graduated from Huazhong University of Science and Technology with a degree in integrated circuits. In 2015, he quit his job and decided to start his own business pioneering the application of internet technology into agriculture.

At first, the biggest challenge his team faced was how to convince farmers of their ideas. "The popularity of mobile phones then was not as high as now, farmers didn't use WeChat, and we had to speak dialects to make ourselves understood," said Liu.