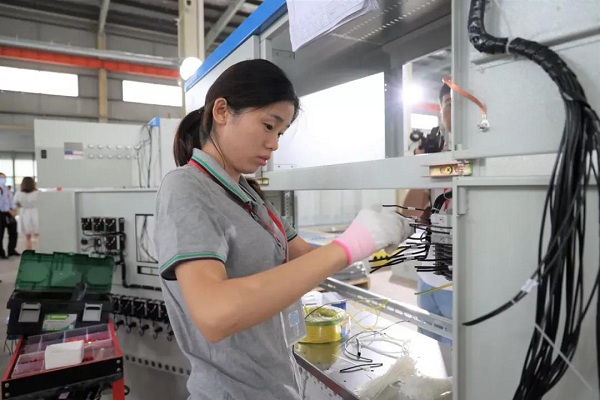 The production line of Holic Electrical Technology Co, a power company in OVC, Wuhan, Central China's Hubei province. The company is among many sci-tech firms that have benefited from preferential financial products rolled out in Hubei. [Photo/WeChat account of Optics Valley of China]

It has been more than 10 years since Wuhan began to explore how to better finance sci-tech enterprises according to their needs.

Back in 2007, Wuhan qualified as one of the nation's first batch of pilot zones for sci-tech insurance innovation. In 2016, the East Lake High-tech Development Zone (also known as Optics Valley of China, or OVC)  became a trial area for investment and loan linkage tailored to small- and medium-sized enterprises (SMEs), and in October 2020, the valley became China's first sci-tech insurance demonstration zone.

By the end of June, 2021, total financing for Hubei’s technology firms hit 665.33 billion yuan ($99.80 billion), up 46.13 percent compared with the pre-epidemic period in 2019, with the number of technological service companies reaching 6,235. And since 2020, 58.4 billion yuan in sci-tech insurance has been offered by the province's insurance institutions to 602 technology firms, with a cumulative compensation of 150 million yuan.

"Finance is the blood of the real economy, the rapid growth of SMEs cannot be achieved without support from financial institutions," said an official from Wuhan Huagong Andin Information Technology Co based in OVC, referring to the company's collaborations with financial institutions in recent years.

The company focuses on information security. In order to independently develop its core technologies, the company must invest large amount of capital into the R&D of network security infrastructure. The investment became unaffordable in 2018, after which the company set up a partnership with Hankou Bank, which issued five million yuan in loans for the company's research programs.

When the COVID-19 pandemic raged in 2020, the company experienced huge losses in sales. The bank again lent a helping hand by extending the loan repayment period, which helped the company get back on track.

There are many such cases in Optics Valley, and now the bank and insurance sectors in Hubei have formed full-fledged financial product systems to serve sci-tech SMEs.

In a bid to support the real economy and minimize corporations' operational risks, Hubei's Banking and Insurance Regulatory Bureau has helped financial institutions roll out innovation plans to promote professional cooperation between banks and insurance agencies.

Holic Electrical Technology Co, a power company in the OVC, boasted 220 million yuan in sales last year and is a direct product supplier of State Grid Corporation of China in nearly 20 provinces. One official from the company highlighted the role preferential financial products have played in the company's development.

In 2014, the firm established a partnership with the Hubei branch of People's Insurance Company of China, and received 2 million yuan in guaranty insurance loans from the bank. "Since we are manufacturers, we have a large number of workers who are at high risk of injury. With this kind of insurance, we don't have to worry about the additional operational costs resulting from industrial accidents."