OVC to implement 12 projects with 40.5b-yuan investment in Q3 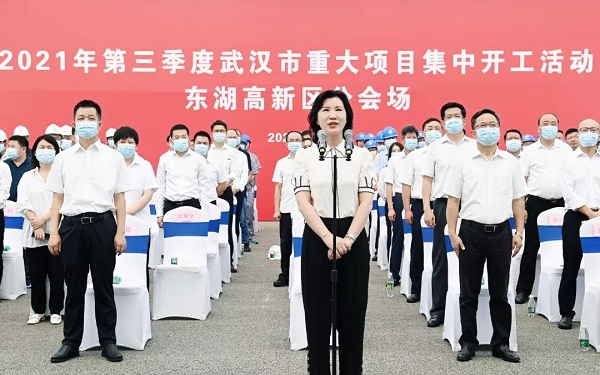 Liu Jie, director of the administrative committee of the Optics Valley, delivers a report on key projects to be constructed in OVC at the branch venue of Wuhan's key project commencement ceremony in the third quarter of 2021 on July 31. [Photo/WeChat account of Optics Valley of China]

A Municipal key project commencement ceremony in the third quarter of 2021 was unveiled on July 31, and one of its branch venues was set up in the East Lake High-tech Development Zone, which is also known as the Optics Valley of China, or OVC, in Wuhan, Central China's Hubei province.

Liu Jie, director of the administrative committee of the Optics Valley, delivered a report on the key projects to be constructed in OVC. There are 12 major projects of to be launched in the valley, with a total investment of 40.5 billion yuan ($6.08 billion). And nearly 90 percent of investments come from advanced manufacturing and modern services. Once operating, these projects are expected to attract more businesses of the same or similar kind, and boost local tax revenue.

The Optoelectronic Research and Manufacturing Base Project invested by Wuhan Tefa Technology Co is involved in the construction and management of industrial parks. The first phase of the project is scheduled to begin operating after one year of construction.

An intelligent equipment R&D base project with an investment of 1 billion yuan by Sanfeng Intelligent Conveying Equipment Co is estimated to be completed in July 2023. The company provides intelligent transmission equipment and optical-electro-mechanical integration equipment.

The High-End Medical Facility Researching and Manufacturing Base (Central China) Project is sponsored by SonoScape Medical Corp. The base will be equipped with high-end medical equipment production lines and a global medical facility maintainance center, together with its other supporting infrastructure.

The Optics Valley No 38 Primary School Project will be built north of Changling Street and south of Keji Second Road. The school will become a top-class demonstration primary school with 36 classes and 1,620 study enrollment slots.