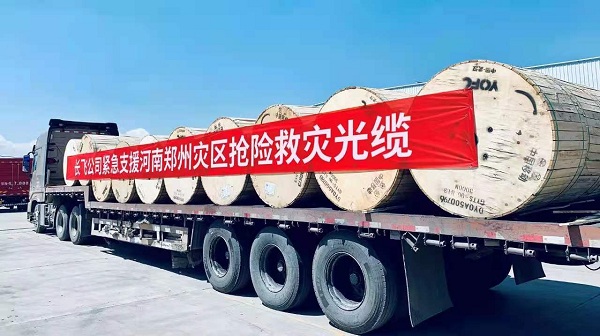 The disastrous downpours that have been ongoing in Central China's Henan province for over a week have raised public concern nationwide. In accordance with municipal arrangements, the East Lake High-tech Development Zone (also known as the Optics Valley of China, or OVC) in Wuhan, Central China's Hubei province, assigned an emergency rescue team to Zhengzhou, capital of Henan, on July 21. Many emergency supplies were also transported along with the team.

In addition, many OVC-based enterprises have responded to Henan's rainstorm. FiberHome Telecommunication Technologies Co, an information and communications network product and solutions provider, has sent 160 technicians to Henan to offer assistance in restoring the communications network and has provided 24-hour remote technical instructions, which are delivered by the company's 63 experts.

The rescue team of CHKO Electric Group Co reached Zhengzhou at 9 pm on July 22 and then went to the organ transplantation center of Zhengzhou People's Hospital, which had been out of power for over 24 hours and had been severely flooded. After nearly 24 hours of strenuous work, the power supply system was back on.

Due to heavy rain, many cities in Henan have suffered transmissions failures at communication base stations. After being informed that many of Henan's optical cables were damaged, Yangtze Optical Fibre and Cable Co made contact with operators in Henan to learn about their situation, and arranged a batch of optical cables for emergency rescue from the company's bases in Hubei, Gansu, Liaoning, Shanghai, Sichuan, and Guangdong.

Shenglong Electric Co sent six technicians and inspectors and carried more than 10 facilities for machine testing and repair services. It arrived in Zhengzhou at 16 pm on July 23 to repair the damaged Metro Line 5.

Other companies, such as Wuhan Xiaoyaoyao Pharmaceutical Technology Co and Dangdai Group Co, also made generous donations to Henan.