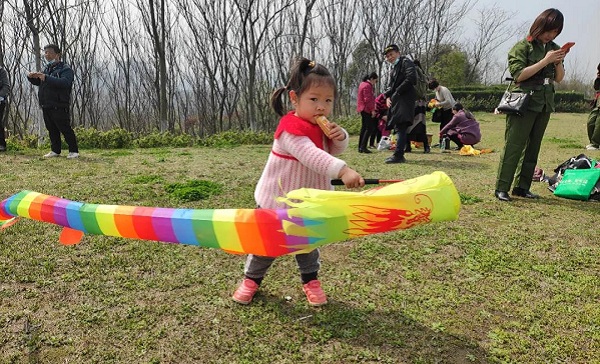 Huanglongshan Natural Park is now blessed with rich green trees, a pleasant breeze, and winding greenways. It is hard to believe that the place used to be an abandoned quarry, an eyesore that infected the whole mountain.

Eight years ago, due to continuous quarrying activity, a huge 15-meter-deep hole was created in the south part of the mountain.

In order to sustain the mountain's ecological functions, officials in Optics Valley came up with an idea – to fill the hole with construction waste soil. After receiving authorization, trucks of soil were transported to the mountain to cover the bare land. During this period, a forest restoration project was also undertaken on the mountain.

The mountain is now filled with tall trees, bushes, and grass, and has become one of the most popular natural parks in OVC, where nearby residents walk and play games, especially in the morning and evening.

One resident who frequents the park said that the fresh mountain breeze combined with the drizzles in summer created an invigorating atmosphere in the park.