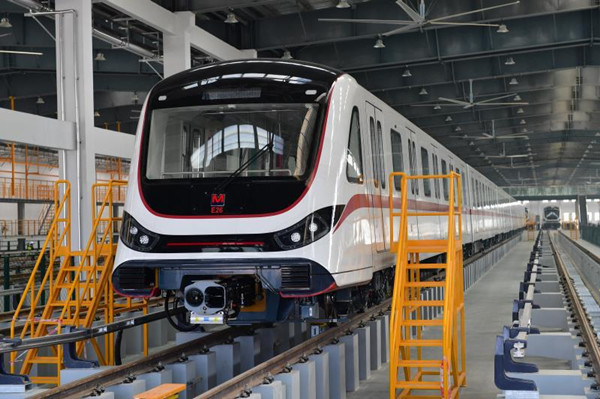 The new train for the first self-driving subway with the highest level of automation in Wuhan, Hubei province. [Photo provided to chinadaily.com.cn]

Wuhan, capital of Hubei province, is testing its first self-driving subway at the highest level of automation.

As a grade-of-automation 4 system, trains running on Subway Line 5 will operate automatically at all times, including opening and closing doors, detecting obstacles and handling emergencies.

They will not require operating personnel.

Due to the cancellation of the traditional driving cab, passengers can see the train moving at full speed in the front, which may greatly improve passengers' subway experience.

The train will have six carriages, each 140 meters long. When full, it will have a capacity of 1,896.

The 33.57-kilometer line, designed for trains running at up to 80 km per hour, links 25 stops between Hubei University of Traditional Chinese Medicine and the East Square of Wuhan Railway Station.

The subway line includes 7.92 km of elevated line with four stops and 27.209 km of underground line with 21 stops.

Although there has been no official opening time, the subway line is expected to ease traffic congestion, meet demands for a better travel experience and accelerate regional economic development.