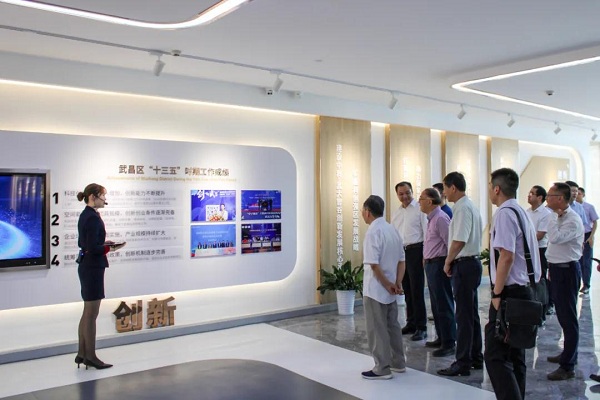 Officials and scholars are introduced to Wuchang district's achievements during the 13th Five-Year Plan (2016-20). [Photo/WeChat account of Optics Valley of China]

A symposium was held on July 6 for the future cooperation between the East Lake High-tech Development Zone (Optics Valley of China, or OVC) and Wuchang district in Wuhan, the capital city of Central China's Hubei province. Optics Valley has decided to work with Wuchang district to accomplish more technological breakthroughs.

The two sides exchanged opinions on OVC’s technological innovation campaign and the industrial layout of an intelligent valley launched by Wuhan University and the Chinese Academy of Sciences. A cooperation framework agreement for coordinated development was also signed during the meeting.

OVC and Wuchang district will share their own innovation factors, accelerate technological transfers and promote the interaction of financial areas and talents.

The technological innovation campaign was launched in OVC at the beginning of this year and takes Optics Valley as a foundation for technological advancement. It also involves Wuchang and Hongshan districts in Wuhan’s west, which boast abundant scientific and educational resources, and Ezhou, Huangshi and Huanggang in the east, where there are many high-tech industrial clusters.