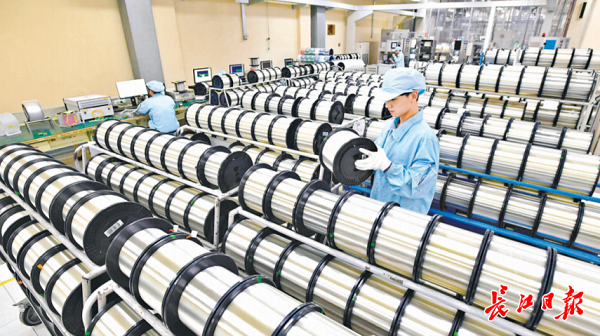 At the end of 2020, the Wuhan government formulated its 14th Five-Year Plan (2021-25), which includes the "965" industrial cluster construction plan. The optical core screen end network sector, as a local pillar industry, is a major part of the development plan.

The optical fibers and optical fiber cables produced in Wuhan have over 25 percent of the global market share, boasting the highest sales in the world for many years. These impressive results were hard won.

Two decades ago, China participated in the formulation of industrial standards for global communications and solved several technical problems existing in the industry, which enabled China to shake off its role as a "follower".

Last month, Yangtze Optical Fibre and Cable Joint Stock Ltd Co (YOFC) took over a major company in South America. Products made by YOFC have been sold to more than 70 countries and regions, and the corporation has founded four overseas bases and more than 20 sales companies, forming a powerful global network that integrates production, marketing, and services.

Voices from Wuhan-based enterprises are constantly heard throughout the global industrial chain. During the first quarter this year, Wuhan Huagong Genuine Optics Co, a key subsidiary of HG Tech, announced that its 400G optical model products had been allowed into markets in North America, Europe, and other regions and countries. The products' output has reached 30 million, making the firm one of the world’s biggest optical model manufacturers.

From product manufacturing to the formulation of professional standards, Wuhan has been playing a leading role in China's laser industry.

The HGTECH Intelligent Manufacturing Industrial Park (Phase 3) began operating this year. The laser glass cutting techniques independently developed by HGTECH Co enables the glass thinner than hair to be cut by laser with extreme precision, with the cutting speed exceeding 200 millimeters per second.

It is estimated that OVC is now home to more than 200 companies involved in the laser business, making up about half of the domestic market.