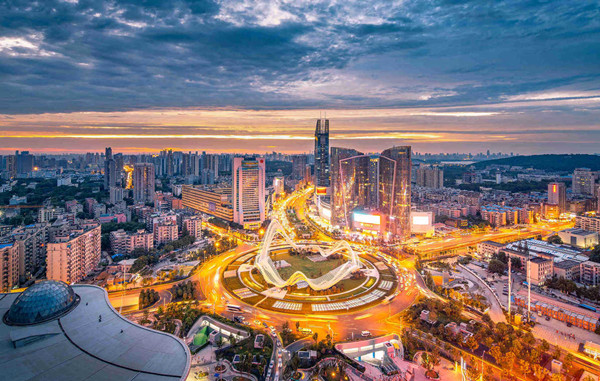 The East Lake High-tech Development Zone, aka Optics Valley, in Wuhan, capital of Hubei province, is aiming to double its annual GDP to 400 billion yuan ($63 billion) by 2025, according to a senior official.

Wang Xiangwang, a member of the Wuhan Committee of the Standing Committee of the Communist Party of China, said investment in research and development will account for more than 10 percent of the zone's GDP by 2025, and the number of patents will double in the next five years.

By continuing to strengthen development of its two pillar industries－optoelectronics and healthcare－the zone will strive to become a national innovation-driven development demonstration area and a pilot area for high-quality growth in Central China, Wang said.

He added that the zone will continue to promote in-depth integration of the digital economy and new consumption, and push for the development of a number of leading industries of the future, including artificial intelligence, quantum information and new materials.

"The valley is now one of the most innovative and fastest-growing zones in Central China. It is quickly becoming an influential global high-tech hub," he added.

It is also an ideal destination for the new headquarters of tech companies, experts said.

In 2017, iFlytek, an artificial intelligence heavyweight, and internet and software outfit Kingsoft built their second headquarters in the zone, which also houses R&D centers for tech giants Huawei and Tencent.

The zone has seen the production of China's first optical fibers and the first optical transmission, and it is one of the nation's 10 key high-tech zones as designated by the Ministry of Science and Technology.

In 2009, Optics Valley launched the 3551 Optics Valley Talent Schema to offer funding for high-end talent. The zone has invested 2.68 billion yuan in the project, with 2,200 individuals benefiting so far, including four Nobel laureates and 66 members of academies at home and abroad, Hubei Daily reported.

With a population of about 1.8 million and an average employee age of 31, the zone has 42 institutes of higher education, including Wuhan University and Huazhong University of Science and Technology. It is also home to 56 research institutes at the national and provincial levels, and more than 300,000 professional and technical personnel, making it one of China's most talent-intensive areas.

Before, those people would have flocked to first-tier cities such as Beijing and Shanghai, where new industries abound, according to Wang.

Return of the natives

"Our founders are all Wuhan natives who want to make a contribution to their hometown," he said.

Supported by Optics Valley's favorable policies and friendly environment for startups, the company's revenue reached 40 million yuan last year, and the number of employees is expected to rise to 200 by the end of this year.

Xiong Yi, who works for a high-tech agricultural company in Optics Valley, said he did not consider first-tier cities in China or overseas when he graduated from Malmo University in Sweden in 2014. Instead, he returned to Wuhan, his hometown.

"Wuhan is a vibrant city that has developed quickly in terms of its economy and other factors. You can have a good quality of life because the cost of living, especially property prices, is much lower than Beijing and Shanghai," the 30-year-old said.

As his family's only child, working in his hometown means he is near his parents and he is used to the local food and lifestyle, he said. He added that he is happy with his current life and has bought an apartment.

In January, Zhang Li, another native, chose to return to Wuhan and work in Optics Valley after living in Tianjin for more than two years.

"My sister also works in Wuhan, and my parents do not want me to be too far away, so returning was not a hard choice," the 25-year-old said.

The quality of life in Wuhan is good, and many of her high school classmates still live in the city, which makes it even more appealing, she added.