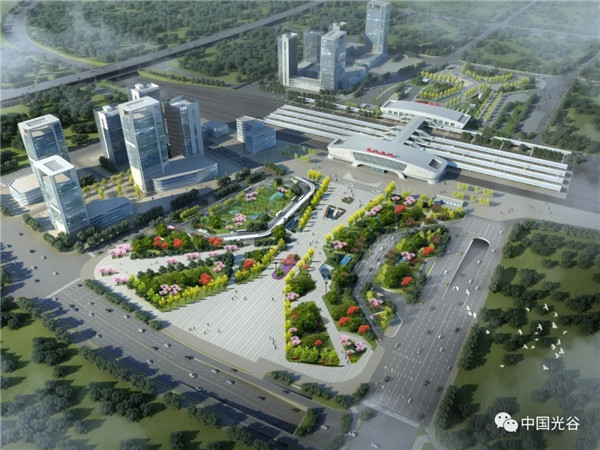 A designer's sketch of the east and west squares outside the new Wuhan East Railway Station. [Photo/WeChat account of Optics Valley of China]

The new railway station -- Wuhan East Railway Station -- under construction at East Lake High-tech Development Zone (Optics Valley of China) in Wuhan, the capital city of Central China's Hubei province, has been basically completed and will be fully completed before the Spring Festival in 2021, according to local media reports on Dec 11.

It will seamlessly connect to the southern extension line of Wuhan's Metro Line 2 and Metro Line 11 and come equipped with a bus rapid transit (BRT) system, conventional bus lines and underground parking functions.

The designs for the underground spaces of the station combine characteristic motifs representing the local economy, the humanities and natural landscapes.

To date, the structures for the two multi-purpose passageways connecting Zizhu Street and Chuangxin Street of the station's east and west exterior squares have been completed.

The decoration, as well as equipment and installation of lights in the squares is currently in progress.