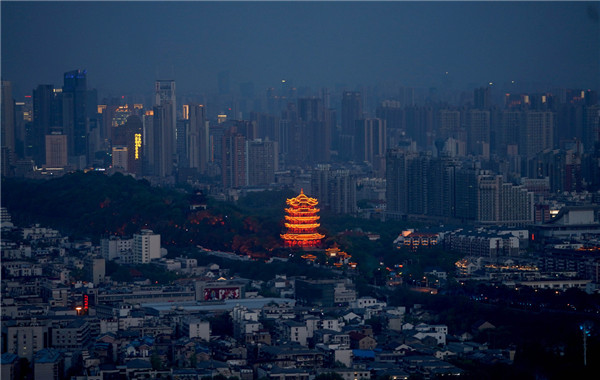 The Yellow Crane Tower, a landmark tourist attraction in Wuhan, will launch night tours, the latest move to boost the city's tourism after the COVID-19 epidemic subsided.

The night tours will be available during the coming National Day and Mid-Autumn Festival holiday from Oct 1 to 8, usually a peak travel season in China.

It will be the first time the historic building will open night viewing since it opened to the public in 1985 after reconstruction.

Visitors will be allowed to ascend the building to appreciate the full moon as well as a light show that will be staged during the period, according to the tour company in charge of the shows.

Perching by the Yangtze River, the 1,800-year-old Yellow Crane Tower often appeared in ancient Chinese literary works. It has been destroyed and rebuilt many times in history.

It is among the major tourist sites in Wuhan, capital of Central China's Hubei province, that have scrapped tickets for domestic visitors as a token of gratitude for nationwide assistance during the COVID-19 outbreak.

In August, Hubei announced the policy to open its key scenic spots to visitors from across the country free of charge till the end of the year. The policy is a boost to the province's virus-ravaged tourism industry.