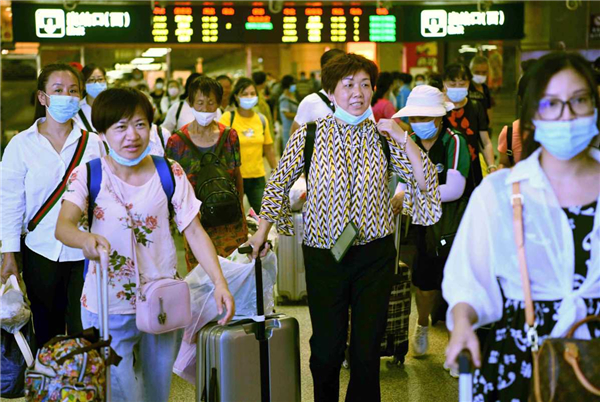 Wuhan, once hit hard by COVID-19, has returned to its normal rhythm as the provincial capital of Hubei has seen its passenger volume surge following the dialing back of its epidemic lockdown five months ago.

The number of passenger trips in and out of Wuhan from Aug 8 to Sept 8 increased more than fourfold compared with the first month after the city's lockdown was lifted on April 8, according to Beijing-based online travel-service provider Qunar.

The city was sealed off and had shut down all of its public transportation at the height of the outbreak in February, but it swiftly regained its role as the country's major transportation hub as its three major rail stations, ferry ports and an airport have been packed with passengers.

For example, the single-day passenger throughput at Wuhan Tianhe International Airport, which has so far resumed 73 domestic routes, hit a high of 60,200 recently, more than 90 percent of the level of the same period last year, said the airport authority.

The city's subway system is also seeing a resurgence of passengers. Daily trips made by subway passengers rose from about 500,000 when the service first resumed in late March to about 2.5 million last week, about three-quarters of last year's level, according to a summary of daily released official figures.

Liu Xiaowei, 32, who works for a publisher in Beijing, paid a homecoming visit to the city recently with her family by air since she was not able to make it back for a family reunion during the Spring Festival.

"Wuhan people have undergone universal nucleic acid tests, and the city has rich medical resources and publishes information in a transparent way," she said. "I feel reassured and safe coming back to my hometown with my two little kids."

The city has reported no new locally-transmitted cases for nearly three months as of the latest figures released by the local health commission on Wednesday.

The unleashing of the pent-up travel demand has also fueled the vibrant growth of passenger traffic volume in Wuhan, as well as the fee-free entrances to many scenic spots offered by the city, according to the local authority and an industry insider.

Wuhan saw a 34 percent year-on-year increase in terms of daily average tourist trips after entrance fees were scrapped at 23 A-level attractions from Aug 8 through the end of the year, said the city's cultural and tourism department, adding that 45 percent of trips were made by people from outside the province.

Luo Yi, general manager of the Hubei branch of tour agency China CYTS Tours, also noted that since the city made the attractions free, the agency has received about 6,000 tourists from other provinces, three times as many as in recent months.

"With the favorable policy and people's strong desire to travel, we will no doubt see more tourists pouring into the city during the coming eight-day National Day holiday," he added.