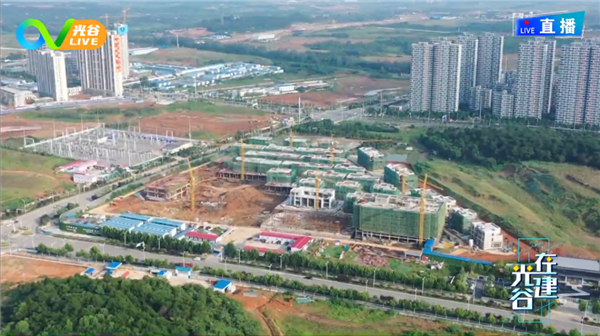 An aerial panorama of the new Hubei radio and television media center, which is under construction at Optics Valley in Wuhan. [Photo/WeChat account of Optics Valley of China]

The new Hubei radio and television media center has made substantial progress since the project resumed construction on March 25, according to local officials.

The facility is advancing well at the East Lake High-tech Development Zone -- also known as Optics Valley of China, which is located in Wuhan, capital of Central China's Hubei province, officials were quoted as saying on the zone's WeChat public account on Aug 3.

The giant facility is the first national-level radio, film and television content media base in Central China approved by the National Radio and Television Administration.

Officials said that after completion, it will be a high-end media base with the most complete functions in China.

One section of the new media base is the Yangtze River cultural and creative park.

Officials said that this park will cover a total area of 300 mu (20 hectares), whose buildings will have floor space spanning 400,000 square meters. It will be constructed in two phases, with a total investment of about 5 billion yuan ($719 million).

They said the Yangtze River cultural and creative park's main structure will be capped at the end of October this year and be put into use in June next year.

Investment marketing of the park has reportedly progressed well and more than 80 Chinese and international companies have committed to settling there.

The park will feature ultra-high definition production, training and education and theater performance facilities, e-sports events and other projects.

It will be benchmarked against top international cultural parks and will be built as a matrix of cultural innovation, media, film and television. Officials said it will serve as a springboard for the expanding digital cultural industry in Hubei.

Meanwhile, according to zone official, the total floor space of the Hubei radio and television media building -- other part of media base project, will be 400,000 sq m.

This will include a 40-story tower, a two-level basement, as well as a three-story security building, props storehouse and broadcast garage.

Officials said the tower will be 203.5 meters high and the new media communications center will integrate a new media technology room, transmissions room and conference center. It is also the highest building under construction in the zone.