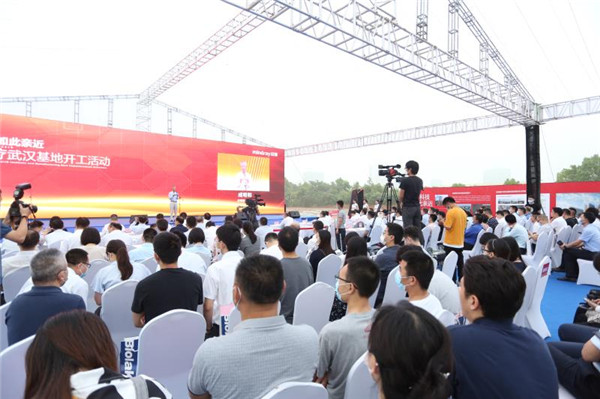 A ceremony marking the groundbreaking of the Mindray's Wuhan base is held in Wuhan, capital city of Central China's Hubei province, on June 20. [Photo/China Daily]

According to local media reports, the project is being constructed at East Lake High-tech Development Zone -- also known as Optics Valley of China in Wuhan, the capital city of Central China's Hubei province -- and after its completion, the project will become the second headquarters for Mindray in the world.

These are a research institute and a production and manufacturing base and the total net development area is about 271 mu, or 18.07 hectares, with a total construction area of about 620,000 square meters.

The Mindray research institute is located at the Biolake of Optics Valley.

It is expected that within five years, the institute there will have 2,000 employees, including 1,200 R&D personnel.

The proposed Mindray production base will be located in the Jiulong Industrial Base of the Optics Valley.

It will provide services for the production, manufacture and operation of medical equipment and biological raw materials.

It is estimated that within five years, the value of the production center will reach 3 billion yuan and cumulative tax paid will top 100 million yuan.

Officials said the establishment of Mindray's Wuhan base in Optics Valley will be conducive to the formation of an entire R&D, production, manufacturing and distribution chain of high-end medical device industry in the zone.

Officials said that after completion of Mindray's Wuhan base, it will become a powerful player in the R&D, production and operations of China's medical equipment, biological raw materials, medical core components and other sectors.