The vast area of the Optics Valley attracts not only the most advanced science and technology, but also offers picturesque natural landscapes. A boundless expanse of blue water ripples in the East Lake, South Lake, Tangxun Lake and Liangzi Lake, while trees flourish in Ma’an Mountain, Jiufeng Mountain and Longquan Mountain, forming fascinating scenery across all four seasons.

Covering an area of 88 square kilometers, the East Lake Scenic Area is a national 5A-level tourist zone and one of the primary key tourist attractions. With a large natural lake as its core, the area’s natural splendour provides sightseeing, leisure and science popularization services. It is composed of five themed parts, namely, Listening Billows, Moshan Mountain, Alighting Wild Geese, Piping and Hubei Provincial Museum, displaying the varied and passionate culture of Hubei. 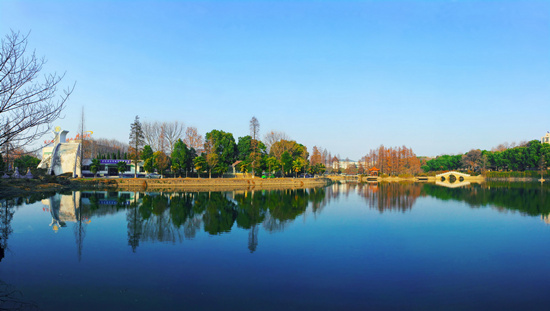 The park also has cultural landscapes named after folk legends. Taiyu Mountain got its name from the legend that Jiang Ziya, an ancient military strategist who helped topple the Shang Dynasty (16th century-11th century BC), once fished there. Similarly, Zilong Mountain was named after Zhao Zilong, a military general in the Three Kingdoms Period (AD 220-280). It is said that he led his troops station on this mountain. Another example is Chuidi Mountain - according to the legend, Zhu Zhen, the sixth son ¬of Emperor Zhu Yuanzhang of the Ming Dynasty (1368-1644), once piped at the mountain when he was conferred the title of King of the Chu Kingdom, thus the mountain got its name.

In the park, there are entertainment projects such as a self-service barbecue, hikes through the forest, dodgems and forest cycle racing.

It is also a place of historic figures and cultural heritage. Folk stories will be told by the locals when passing through Jiufeng Cliffside Carvings, Jiufeng Temple and Three Eye Bridge.

The park, having a forest coverage rate of 73 percent, is graced with an abundance of wildlife, with more than 60 kinds of birds inhabiting the site. The West Mountain area has formed unique landscapes against the backdrop of the city outskirts, featuring flowers in spring, green lotus in summer, red leaves in autumn and evergreen trees in winter. It's a wonderful destination for cycling, barbecues and other leisure activities.

Jiufeng Forest Zoo is located in Jiufeng National Forest Park. It covers an area of 800 mu (53.33 hectares) and exhibits more than 80 kinds of animals, with more than 8,000 square meters of wild animal cages, a forest coverage rate of more than 85 percent and more than 10 tourist attractions.

It also has sites and facilities for tourists to go picnicking and tent camping, have barbecues and other special activities. The area has also set up many team projects for tourist groups of all ages.

Since its opening in 2004, the zone has become a comprehensive tourist spot that has facilities for animal watching, breeding programs and scientific research, forest leisure, recreational activities and catering.

As the second largest freshwater lake in Hubei province, Liangzi Lake is hailed as “a natural emerald” and the hometown of Wuchang bream. The lake covers 370 square kilometers and consists of 316 branches.

With intersecting lakes and islands, Liangzi Lake boasts a thriving ecological environment. During each October where crabs return, citizens will gather by the lake to enjoy the mouth-watering crabs and scenery with their friends for holidays, making Liangzi Lake a perfect place for driving, hiking and recreation. Liangzi Lake is the mother lake of Niushan Lake.

With breathtaking natural scenery and clean, vast water, Tangxun Lake is divided into east and west by Jiangxia Avenue and connected by a culvert.

From the Three Kingdoms (AD 220-280) to the Ming Dynasty (1368-1644), the lake was a crucial channel between the Yangtze River and Liangzi Lake. Here stands the largest villa complex in Wuhan and the popular “Tangxun Lake fish balls”. 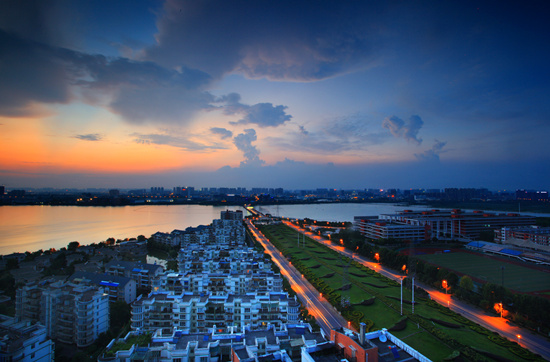 It is said that Yanxi Lake was excavated by an eminent family surnamed Yan during the Kangxi period (1654-1722) of the Qing Dynasty. It features gorgeous landscapes with lakes and hills, scattered islands, reeds, cattails and lotus flowers. There are large scale tea plantations, peach orchards and orange orchards by its side. 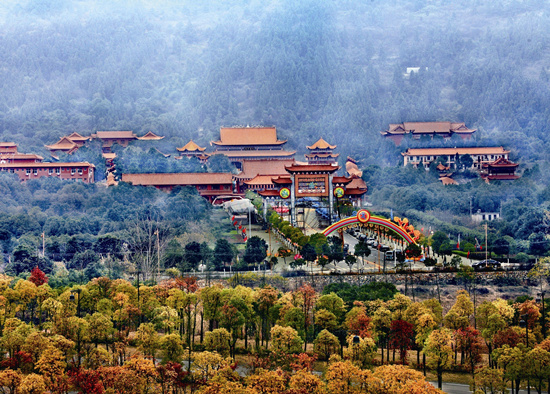