Editor's note: As the Chinese economy enters the new normal with its growth rate slowing, innovation has been placed at a core position in China's overall development. China Daily recently interviewed people involved with a leading State-level innovation pilot zone, Optics Valley of China in Wuhan. This series of reports will use the valley's case as an example of what China has done to boost innovation and the difficulties and challenges faced.

Humanwell Healthcare Group, a leading healthcare solutions provider headquartered in the Optics Valley of China in Wuhan, plans to focus on the United States in the next five years through mergers and localized research, its top executive says.

"In the next five years, we are going to do a lot of research and development in the US and register more products as well as making purchases," said Wang Xuehai, chairman of Humanwell.

"The advanced technologies and high standards in the US will help bring down costs, which will eventually benefit China's general public."

Founded in 1993, Humanwell is now active in over 10 countries as one of the largest provider of anesthetics, fertility regulation and Uygur medicine in Asia. Listed on the Shanghai Stock exchange, it registered 10 billion yuan ($1.5 billion) in revenue in 2015, up 42.6 percent from the previous year, and net profits of 654 million yuan, up 44.7 percent year-on-year.

The purchase was made by Humanwell Healthcare USA, Humanwell's US branch designated for overseas healthcare industry investment.

Humanwell said the purchases were good for the company to gain traction in the pharmaceuticals market in the US, expand its overseas sales channels, enrich its portfolio and enhance its profit generation capacity.

"We manufacture domestically while doing research and sales overseas," Wang said. "At the moment, we have more than 100 local employees in the US selling more than 40 products. We have become one of the major soft gels suppliers in the US."

Wang said Humanwell is expanding its product portfolio to raise its recognition in the US. Epic Pharma has more than 50 products for sale or in development. This will greatly boost Humanwell's status in the US market, and could help it become one of the top 20 generic drug suppliers in the country.

Wang recalled his first foray into international markets nearly a decade ago. He said he looked at Indian pharmaceutical companies' experiences when they entered the US and European markets in the 1980s. They did not gain a firm foothold in those markets until more than 10 years later.

"China has to experience the same long and painful process too. But no pain, no gain. Transcending the high threshold and breaking down the barriers in the market both take time and investment. Yet losses will eventually be compensated if we keep going," he said.

According to Wang, Humanwell has gained many benefits from the talent-rich Optics Valley in Wuhan. As part of the Biolake section of the valley where biotech talents, new technologies and products congregate, Humanwell has outsourced many projects to neighboring businesses.

"At Optics Valley there is no lack of innovation, yet it needs to turn more to the international market. Comparing to watching from afar, it would be totally different to set our feet on a foreign land by ourselves. What we have seen and done in the US has made a deep impression on our minds. Our competence has therefore been remarkably improved by this process," Wang said. 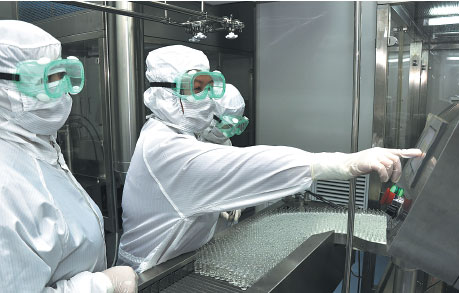