Optics Valley Central City was designed by SOM Company of the United States to be a complex of financial institutions, corporate headquarters, offices, entertainment, and high-end residences.

It is located at the middle of the East Lake High-tech Development Zone -- also known as Optics Valley of China. It is adjacent to Jiufeng Forest Park in the north, Wuhan East Lake Free Trade Zone in the south, Biolake in the west, and Wuhan Future City in the east, with a planned total area of 36.15 square kilometers.

It intends to be a high-tech business center and a headquarters area of high-tech innovation companies from the province and central China.

By borrowing the idea of "small neighborhoods and high-density road network" from Chicago, the City was constructed as a well-knit community of commercial centers and residential zones, with its nodes based on its three subway lines and streetcars.

Optics Valley Central City is a high-tech business center in Optics Valley. It aims to build itself up as an international business district that serves Central China, radiating out to the whole country and connecting to the whole world. It also aims to build itself as a headquarters control center and back-office services center that can promote the development of Central China's emerging strategic industries.

At the same time, it aims to build itself as a demonstration platform to promote Wuhan's financial innovation, the integration of its modern service industry and high-tech industry. 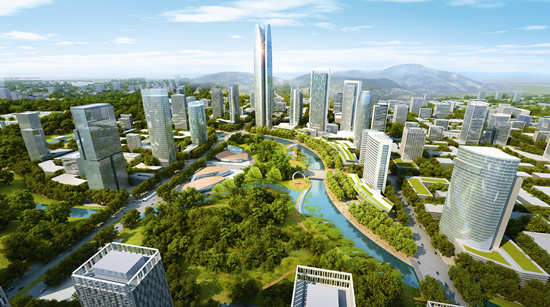